The Easy Way to Simplify Your Greenside Bunker Play

Improving our self-talk is something we could all benefit from and somewhat of a low hanging fruit in the world of trying to improve overall score and perhaps enjoyment of the game.  A great trick to start the journey of creating neutral to perhaps even positive emotional reaction is to compartmentalize what we are actually reacting to.  In this case Let’s choose a standard greenside bunker shot and explore the process.

In a good majority of my greenside bunker lessons I like to break everything down into two elements.  The first of which is something I term “Entry Point.”  Which would be defined as the impact point where the club head actually starts to enter the sand.  I do hold some preferences as to where and how this happens, however an important note is that there are variations for different types of players and/or skill levels.  However, we get the clubhead to enter the sand there is no doubt that controlling that entry point has a lot to do with the techniques used to so.  That is why controlling the entry point is number one, to some level we must either push our technique or skill to a point where there is some degree of control.

This step could involve items that are as simple taking your current technique and upgrading your skill.  Examples of how to do that would be increasing your awareness of the club head (line drill), creating more awareness of the face (monitoring start direction), and/or creating a spatial awareness (staggered cone drill).  However, it could also need to a technique bump.  For most the following adjustments can have a huge impact on results.

Most golfers would benefit substantially by moving the ball position for a greenside bunker shot forward in their stance.  As stance with is variable I like to put the ball under the chest logo of a shirt for the right-handed golfer. (ahead of sternum on lead side) This allows for many positives… assumption of natural low point and lead side exiting arc would be up near the top. 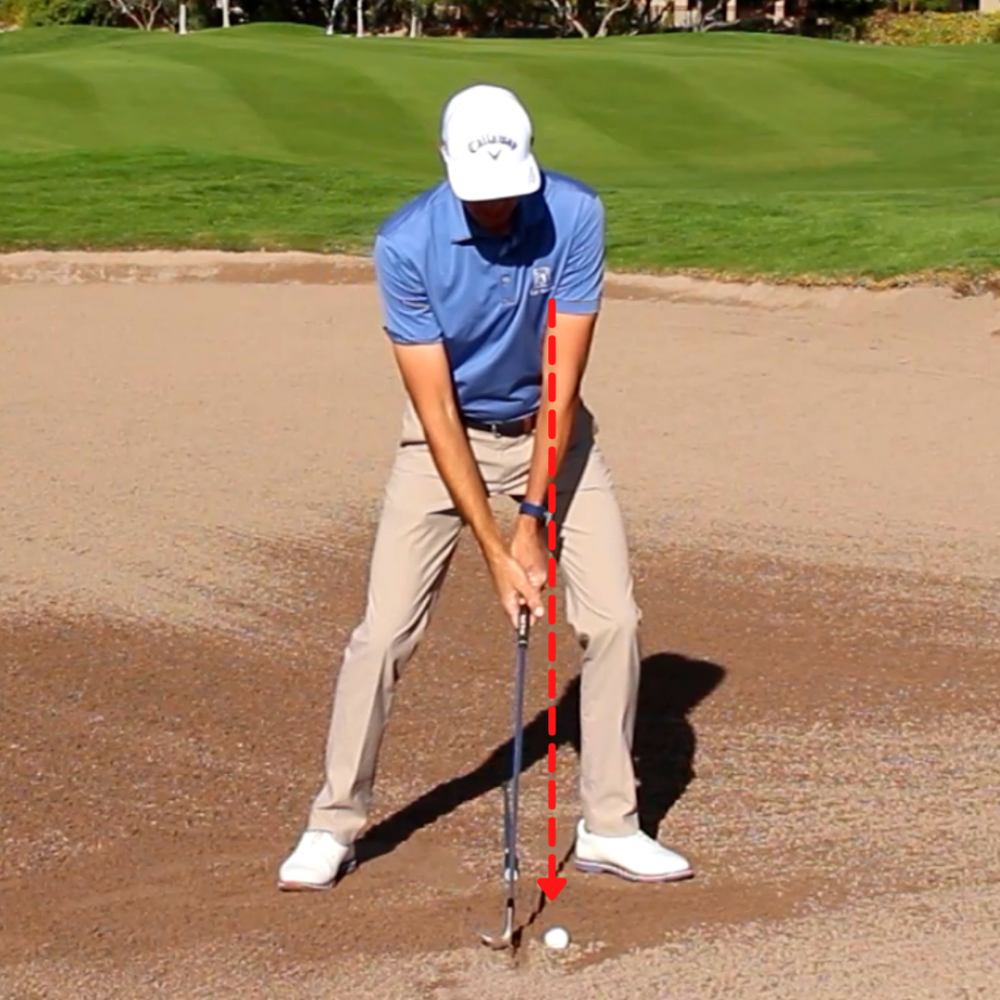 A great way to give our selves a better chance of moving the low point of the swing forward is to limit secondary spinal tilt.  Think of this as leaving the spine neutral to how you would normally stand, picturing each of your vertebrae on top of one another vertically, or “stacked.”  This is definitely an understated and often missed missed in most golfers bunker setup. 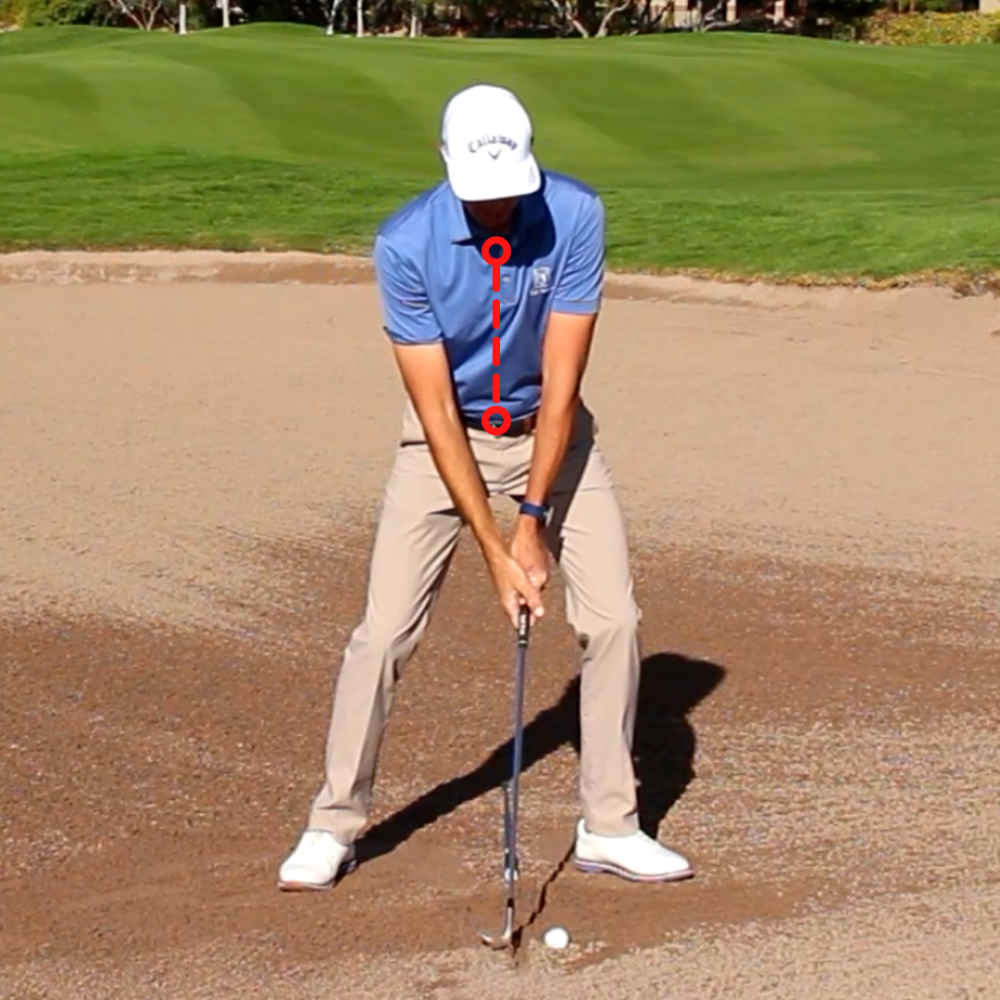 If you notice from the top image the setup itself is fairly asymmetrical.  Some of this is due to the variable stance width and the front ball position, however there is also a purposeful lean into the forward leg.  A slight activation of the lead quadricep as of it was trying to bite the ground.  This helps establish stability in the lower half and specific action required of the lower body to execute the bunker shot. 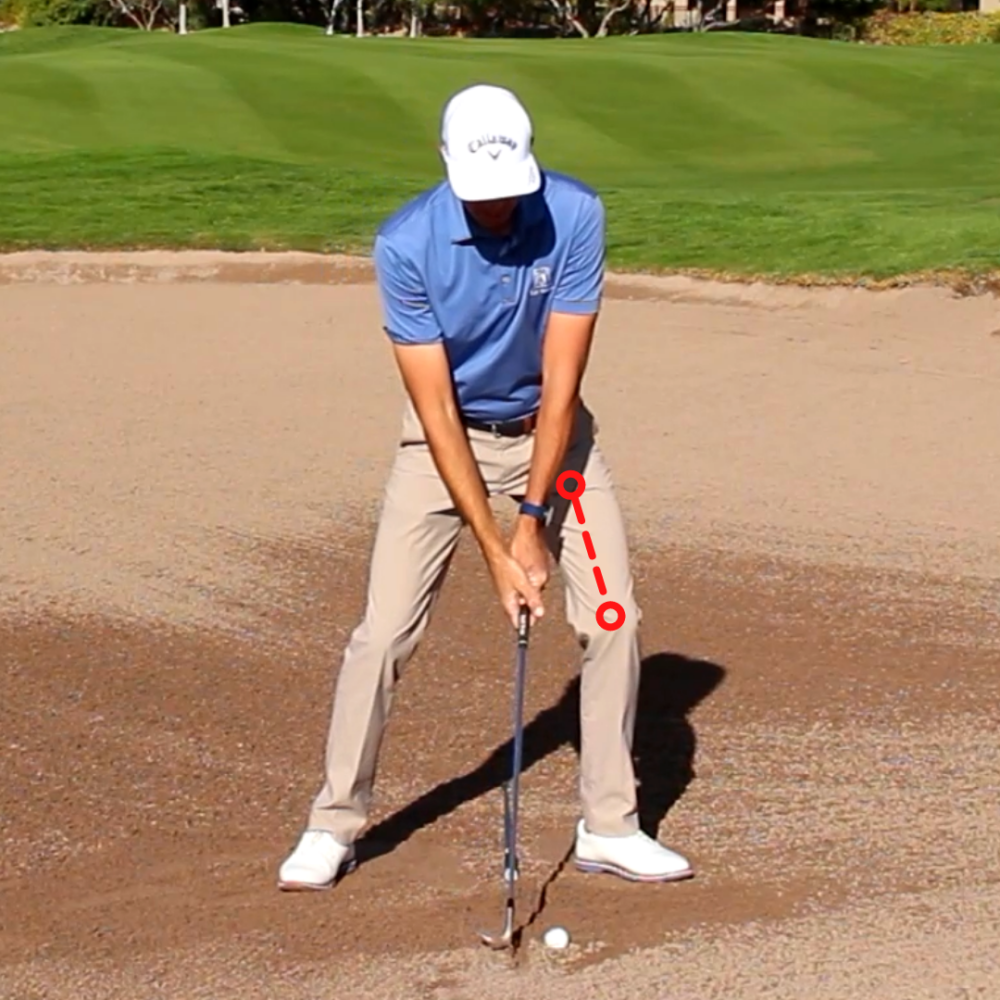 Because of some the setup difference that were established above, the pelvic bowl will work differently than the full swing.  (I have a whole video on this, click here to watch) As noted in the picture to the right the slight lean into the lead quadricep will come into play helping the lead knee maintain more flexion through the impact area. Notice the entry just at our pre marked line. 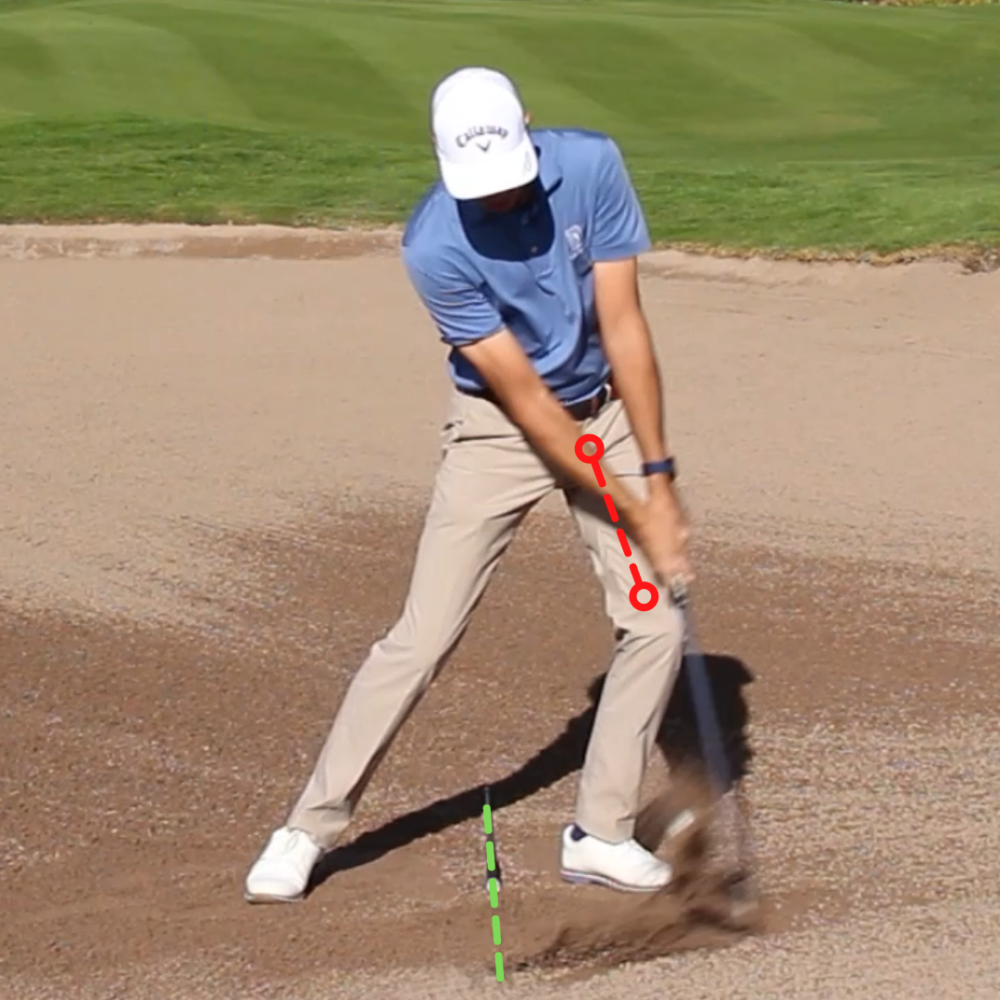 Even with the setup adjustments we have to insure the torso keeps moving during the swing.  This is the the true controller of the arc and what ultimately allows us to create the image we see to the right…lead knee still in flexion, handle moving up and in, arms extended off chest, clubhead a long way from the torso. 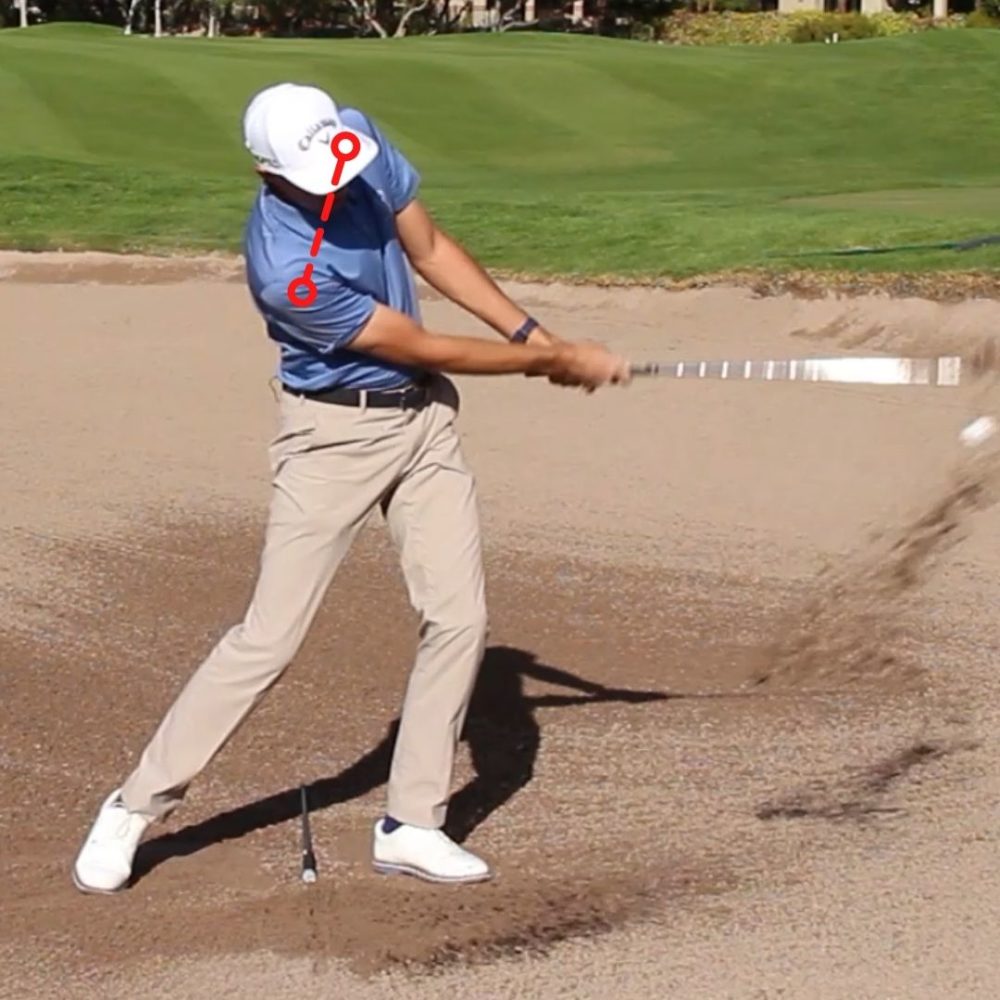 There is more to greenside bunker play than jus entry point however.  Technique is a large part of the story, and generally the only one that most poor bunker players focus on.  More skilled bunker players will tend to focus greatly on my number two which is creating an understanding of how much sand is beneath the ball.  This step is paramount to overall success in result as without this information,  establishing what I will call the loft/bounce relationship is essentially just a random act.

Random meaning that  if you the golfer move into  multiple greenside bunker scenarios, lets say different types of sand, dry vs. wet sand, fluffy sand vs. hard clay.. etc. and we enter into those with the same open face, same bounce exposure, and same club.  You the golfer even with very quality entry point will experience a catastrophic mishit in the if not most of the changing conditions.

A skilled bunker player would be defined as one that not only a technique suitable enough to execute the entry point of the club, but also the ability to read and assess how much and what type of sand are underneath the golf ball.  Understanding what to do when we find out that there is for example no sand underneath the ball is a skill.  That process would be…lower expectations, take more loft and square the face up (deactivate any bounce), possibly narrow the stance.  Keeping in mind we activate bounce to deflect of the surface of the stand essentially impending the action of collecting sand particulate. 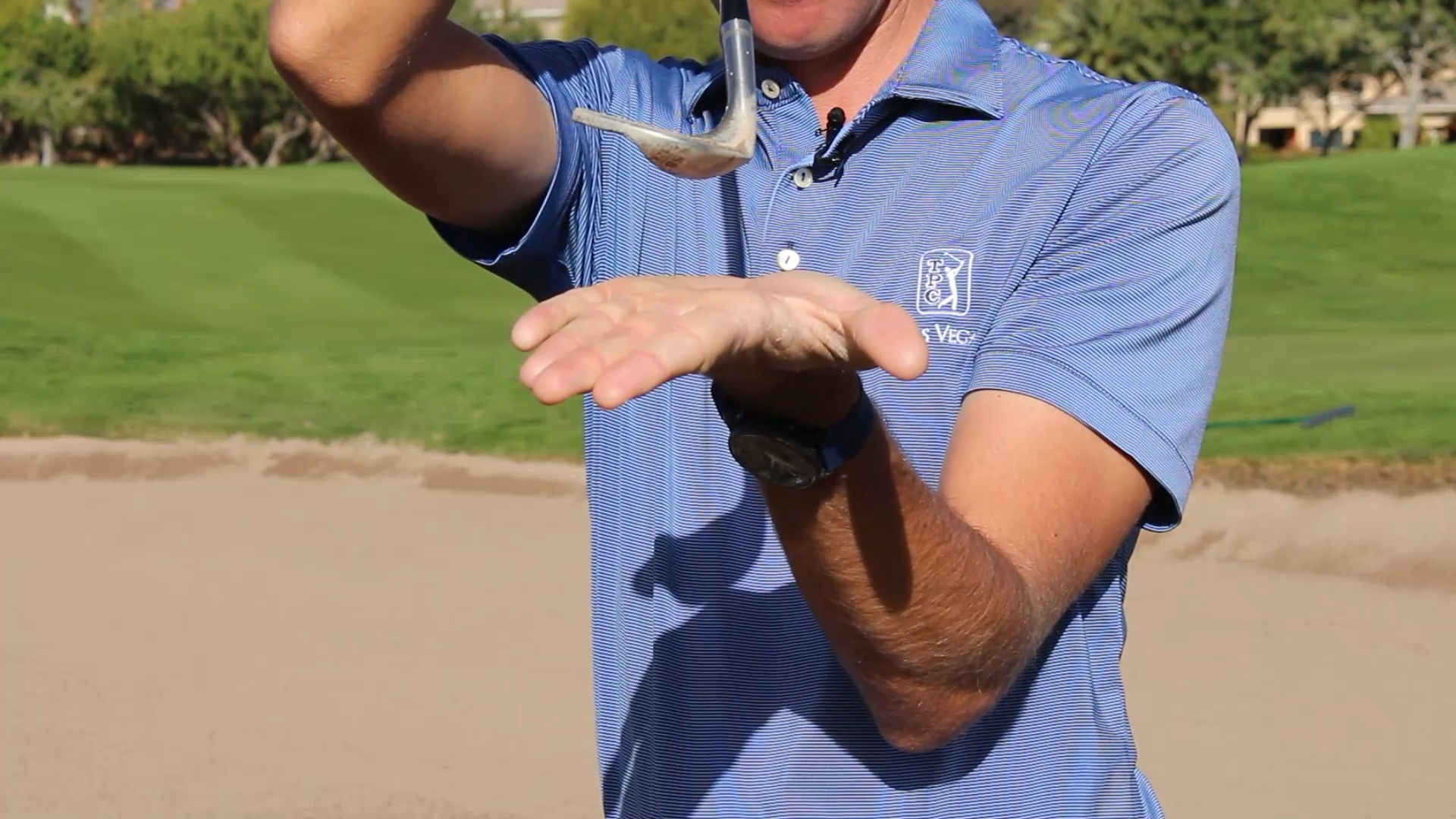 Hopefully the concept makes sense.  We need different amounts of bounce for different types of lies/ situations.  Since activating bounce appropriately i.e. neutralizing the shaft  could effectively change the loft, we may need to use different clubs to achieve the loft/bounce relationship we desire for the shot at hand.  It could also come down to intention, good bunker players control how much sand is between the face and the ball.  They do this not with entry point, but with bounce and knowledge of how much we need per sand situation.  Most poor bunker players are trying to control how mush sand is between the face and the ball with entry point.  The problem with that is that quite frankly as a species we do not have the much control over the impact area.

The best thing to do is experiment.  Find a spot in  a bunker with no sand, find a spot with some sand.  Use entry point as a control variable and move the club face to open in 1/4″ increments while hitting shots.  At the end of the day nothing will ever replace human experience.  Give it a try and let me know the results.