Course and Self Management

To get moving into the correct mindset about improvement I want you to group yourself into one of two categories below.  Understanding what is possible and what may not be is paramount to setting achievable goals.

A) I define consistency as hitting the ball relatively the same every time I play or practice golf. Scoring within a range of a few stokes, just like TOUR Players do

B) I will seek to better myself daily, understanding that there will be setbacks physically, mentally, and psychologically. I am understanding of my score being as many as 15 stokes different daily, depending upon conditions, and physical and mental preparedness.

Most of us and many of the players that come to a lesson tee looking for guidance are smack dab in the middle of Group A.  The truth is that all of us have a little of Group A in us.  But really good players generally reside in Group B.  Changing your mindset to a Group B player will take time, understanding and most likely some convincing.  To that end, there will be a lot of TOUR player talk in following paragraphs.  In full transparency there is just more data, so it is hard not to.  Plus, most of us can relate to them on some level, because we watch it so often on television or visit the events in person.

On the other side, arguably, we should not compare ourselves to TOUR players.  They have more time to practice, play, generally more funds to pursue coaching and training.  They also potentially possess physical gifts and talents which we quite frankly do not.  Which means it may not be wise to compare.  On the other hand, they are just humans playing a game.  Key concept/ term being Human. Golf is a Human game, which means by default it will be inconsistent by nature because there are human variables. This is an important thing to be able to accept mentally.

Everybody wants to be consistent with their golf games.  Defining that is sometimes hard and often unattainable in golfs current form.  Most amateurs’ expectations of consistency mirror what they perceive of TOUR players.  Players so good that they can, on command hit any target desired at any distance.  This perception can be due to any number of factors, glorification of certain players over the years, TV Commentators, only the best players of any given week being televised, lack of physical exposure to good players, or just normalcy bias.  All of this can paint a picture that the best in the world have a rifle and can simply point, shoot, and fire… ala consistency.

However, learning that the best on the planet still experience troubles is the first step toward facing the reality of the game we play.  The average round on tour consist of 12 greens in regulation, ( reaching the green in three shots on a par five, two on a par four and one on a par three)  and in fact for any given year on the TOUR there are only about five to six rounds that actually accomplish 18 greens in regulation.  That is not five to six rounds per player, that is for the entire TOUR for any given season.  The reality with full swing is that they have a shotgun, not a rifle, and that shotgun blast has a different radius pattern (see picture below) with every respective club.

Then we can move to score, TOUR Players are consistent when it comes to score.  Right?  Ultimately it depends on how we define consistent.  If we use the example of a TOUR Player over the period of a 72-hole tournament scoring could seem relatively consistent or the same.  How about over the season?  I choose someone I perceived to be very successful, the winning est player in Champions TOUR history, Bernard Langer.  His score range over the 2018 season is listed below. 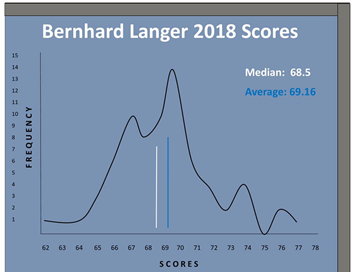 Low Score of 62, High Score of 77.  Really good playing and amazing to have a scoring average that is sub-70.  However, is it consistent by the average golfer’s definition?  From my conversations with the average golfer I would say that a 15-stroke span would be considered inconsistent relative to their own scores.

Actual quotes from my lesson tee, from an average golfer:

“I shot an 85 the other day and played pretty well.  Then the very next week I went out and ballooned all the way up to 93. I just need to be more consistent.”

Back to TOUR players for a second, I’ll do another graph.  Justin Thomas had an incredible year in 2017 winning five times, including his first Major, and amassed over $9 Million in winnings.  The most impressive feat is that he won five times over the period of 11 months, and certainly could fit the narrative that he was consistent over the entire year. 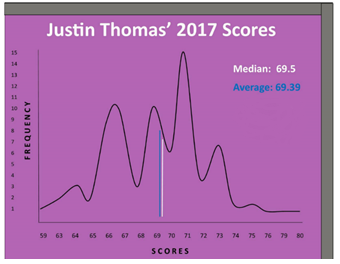 However, he also missed five cuts, including three in a row.  He missed three cuts and had a T47 Finish right before winning the PGA Championship in August.  His season high score was an 80 (Open Championship) and season low score was a 59 (Sony Open) coming in at a whopping 21 stroke difference.  Again, quality scoring average, quality results, amazing play, and totally world class, but is it consistent as compared to expectation of the average golfer?

On average TOUR players perform within a 15-stroke difference during a competitive season.  We are dealing with the best in the world with that stat, but I think it is highly relevant to the average golfer.  Golf is played over an ever-changing environment, and our bodies change daily based on amounts of preparation, activity, diet etc.  We will experience different scores and we will shoot the same score in different ways, that is the nature of golf.   A neutral and relevant goal should be to be able to accept a scoring range as noted above.  If you are unhappy with the low score in your range, then you must work very hard to drive the low score down.  If you are unhappy with the high score in your range, you must also work to lower your low score, but also be accepting of the fact that there is a high score in that range still possible.

Consistency in golf is adjusting to what is happening in an ever-changing environment over a period time.  That might seem generic, but it encapsulates what golf is. The other truth that I have discovered after spending the last 15 years with the average golfer, is that not all goals are score goals.  Some just want to hit the ball a little better to enjoy the game more, or to simply impress their father in-law.  The keys to goal setting:

What Should I Expect to be “Consistent” at?